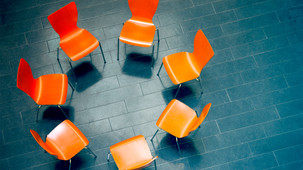 A Man’s World is a compelling new drama following the lives of four violent male offenders thrown together on a six-month rehabilitation course. If they pass, they get a community service order. If they fail, they have to serve their jail sentence. Written by Waking The Dead writer, Adrian Mead.Attendance is compulsory at The Men’s Group as all the participants have recently been convicted of a serious violent crime. This pioneering course works to challenge and radically alter the participants’ behaviour by forcing them to confront and recognise why aggression and violence shapes their lives. At stake is their freedom. Upon completion of the twenty-five-week course the courts ask the tutor, the central character Angela (played by Siobhan Redmond), to recommend either a community sentence or a jail term.

In the group there is nowhere to hide. Many participants in the real life course have stated that if they had known what they were expected to face, they would have opted for a jail sentence instead – “In your head you’re sayin’, what are they going to think of me if I really tell them everything? But the other guys see it, and they push you further, to the really dark stuff you never tell no one.” The drama captures the terror of facing up to your past and finding new ways to behave, or going to jail. Getting in touch with your feelings doesn’t come easily to guys like this, but it is their only way out of jail, and is a hugely important issue for Britain today.

Back
Scroll to Top